For me, wildlife photography is not about taking pictures for contests or sales or even hanging on a wall, it’s about the relational experiences created and enjoyed while taking the picture. It’s about the friendships made while photographing or the experience of the trip to get to the place to capture images and it’s about learning the subject, it’s behavior, it’s chemistry or the physics behind the image. It’s about making new friends and cultivating relationships. It’s about the journey and not just the mission.

This project is a series of face-to-face photos of some our favorite wildlife in our favorite wetland parks in Palm Beach County. As you will see, the animals in the two parks were very cooperative as I captured their images for this project.

Face to Face with Rory 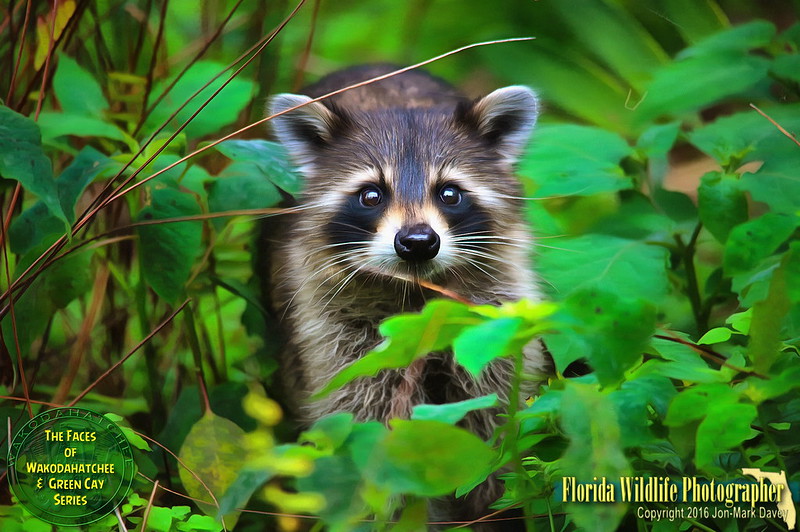 I first spotted this character in the generator parking area at Wakodahatchee. He was cautiously trailing across the parking lot under the power generators deployed following extreme floods and storms. Stopping every few steps, sniffing the air, looking both ways he moved carefully studying the area before advancing to the next yellow box on wheels. Before he could escape the fence several people emerged from the ladies room making a bit more noise than he was comfortable with so he hid behind the tires poking his head out between them to take a peek.

It took only a moment before he turned around and headed the other way and shot out under the south end of the fence. He must have been trying to escape the building area to skitter into the wetland for a bite of diner. As he was heading back across the wooded area he stopped for a quick eye contact with me, SNAP.

Face to Face with Grumpy Heron 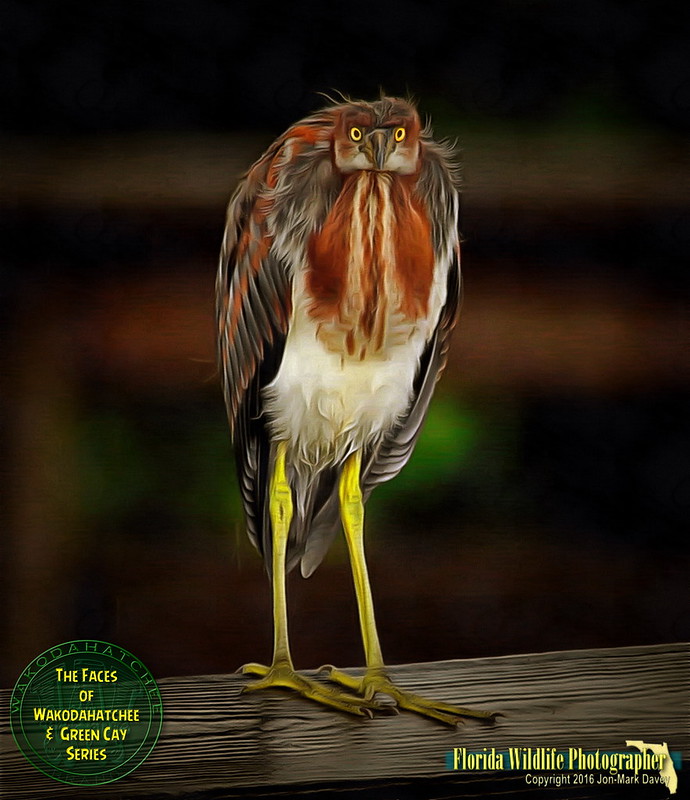 Say hello to “Grumpy Heron”! This is the photo that inspired me to take to the boardwalks to capture full wildlife faces. This is a tri-colored heron sub-adult, fledged, who was feeding with its siblings along the boardwalk rail just past the north-west tree tunnel in GC. Over the years I’ve photographed a lot of birds diving from the handrails fishing, but this little guy decided to rest up a bit and stare at me staring at him through a camera.

The tri-colored heron, Louisiana Heron as it’s called in states to the west of Florida, have such wonderful personalities and behaviors from birth. Within a few days from hatching they are capable of protecting their nest with amazing feather displays should predators approach the nest, watch them sometime. Their face has so much personality and conviction. As adults they even seem to “grump” as they fly from one location to another, it’s like someone is always bothering them.

Last year and this year there seems to be a bumper crop of tri-colored chicks so I’m sure we’ll see more photos of them in the future.

Face to Face with a Tri-colored Chick 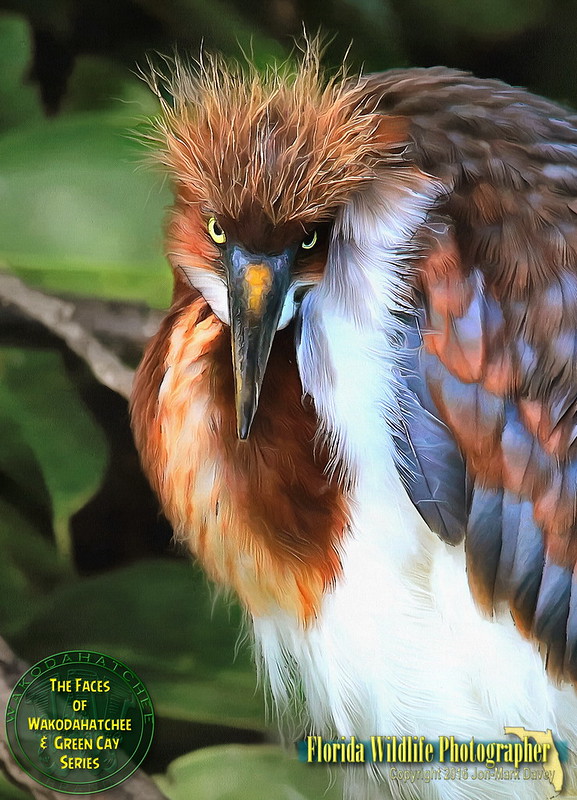 I captured this shot on a late Friday at Wakodahatchee Wetlands in Palm Beach County just before sunset; a small photographic contingency was stealing along the boardwalk photographing for our individual and group Facebook journals. It was a beautiful evening, the sky was mostly clear and the breeze filtered through the flora and over the water to cool it off just a bit. This image has been the most viewed shot for this project by my Facebook and Flickr groups.

Face to Face with a Black Bellied Whistling Duck. 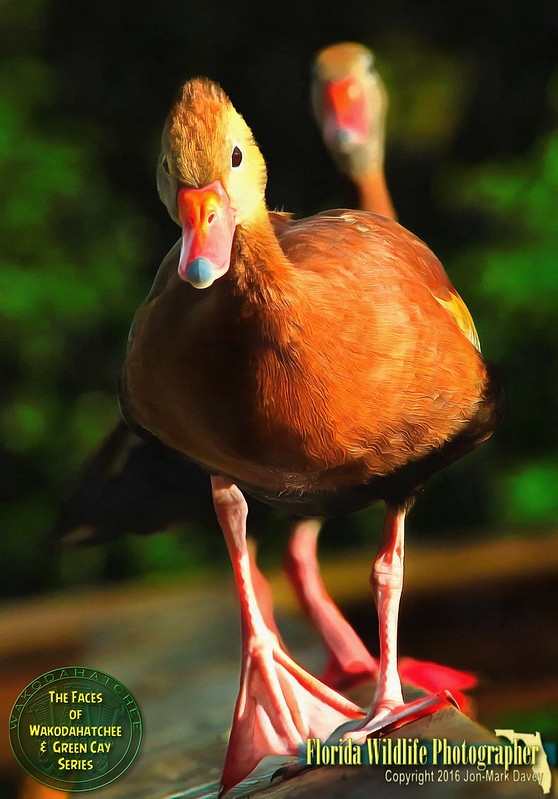 I remember seeing the first pair of BBWDs in Wakodahatchee almost 10 years ago. The first visiting pair established a nest in the old tree snag in the north east pond, out past the gazebo. I still have a video showing the first chicks flying for the first time that season. I thought they were amazing, beautiful birds and I hoped that more of them would move to our wetland and setup house. Wow! Did they ever come in and set up house. Now we see dozens of them during the winter and spring. Several times this past year I’ve counted over a hundred BBWDs in Wakodahatchee either on the berms sleeping or in the water next to the entrance.

I love to hear their familiar whistle like call as several pairs fly overhead late in the afternoon while heading to feed or rest. Sometimes they just all get together to hangout on the berms to socialize. This particular pair seemed very friendly, I though he was going to waddle right up to me as I photographed him this past Friday evening.

Face to Face with the Black Neck Stilt 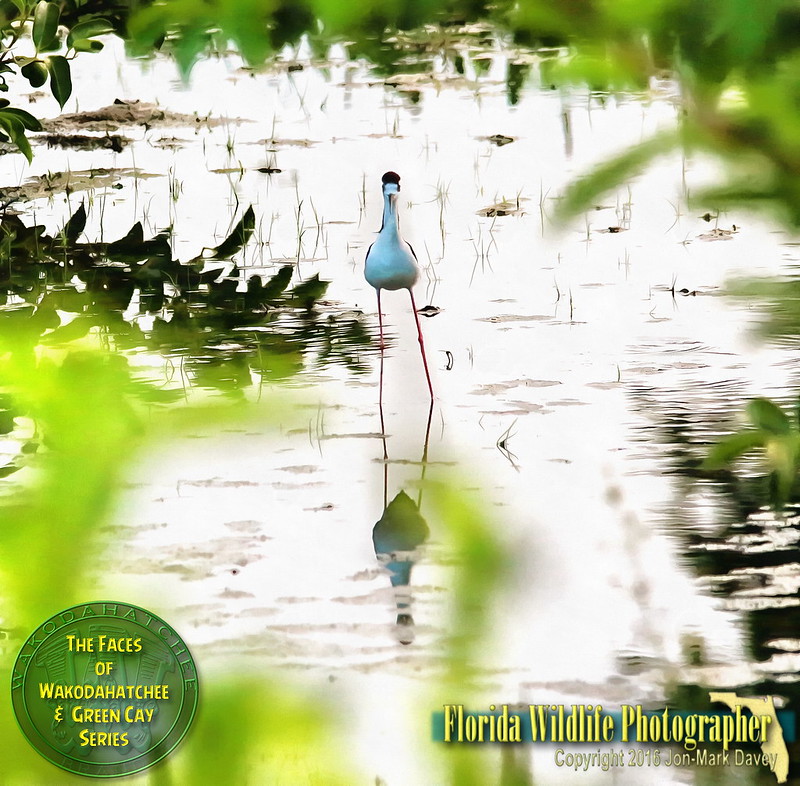 Our group was among the last to leave Wakodahatchee on Sunday evening. For about an hour before leaving Wakodahatchee the Stilts in the southern pond were making quite a ruckus, flying, dive bombing people, and making a lot of noise. They were very animated.

Just before passing through the tree tunnel over the berm to head to the car one of the Stilts landed just in the pool to my left and looked up at me as if to say “BYE, have a nice day”! It was at that moment I was able to capture another face to face with one of our wetland friends.

Face to Face with a beautiful Swamp Hen and Friend. 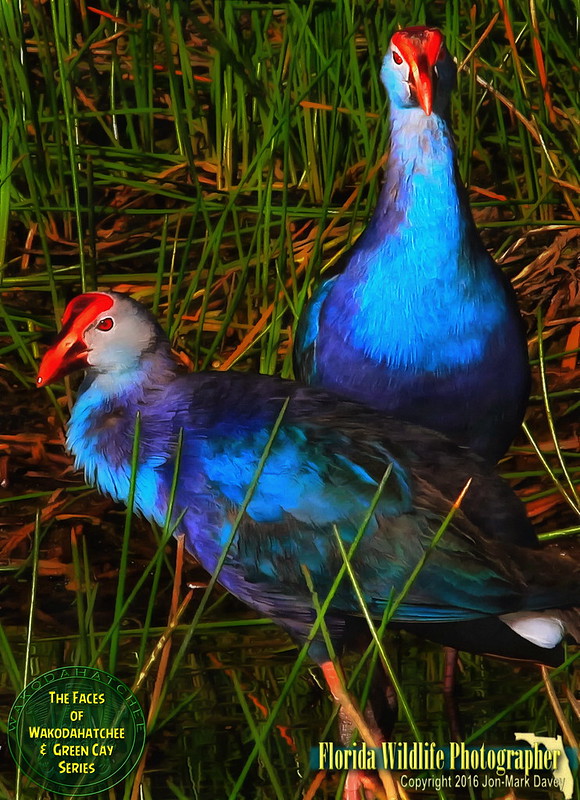 I captured this shot in Wakodahatchee on Sunday as the birds were about to be shaded by the boardwalk as the sun set. These birds were fairly easy to capture a shot, they seem to like to watch their surroundings with both eyes. Their bright purple and blue colors are spectacular in the sun which creates almost a glow in photographs .

Some don’t like that these birds are now living in our wetlands since they aren’t a native species; I’ve been persistently watching them whenever I get the chance and they seem to need a totally different food source than locals.

Face to Face with Woody Chicks 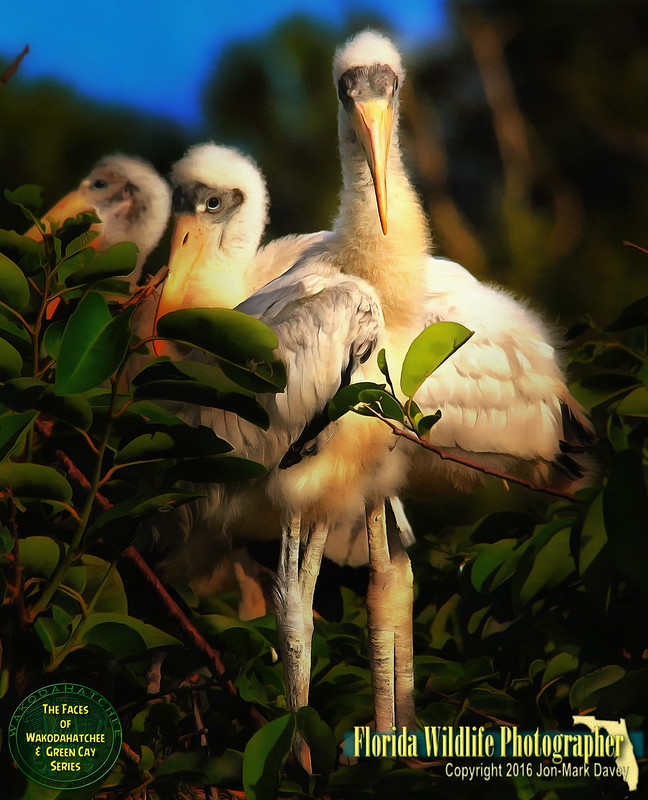 Photos of Wood Stork chicks have been outstanding this year so it seems natural to have a Face-to-Face with a Wood Stork chick … and his brother. This group of three Woodie chicks were spotted begging for food on the very top of the mound on Sunday and were too irresistible to pass up. There were three of four of us long-lens photographers squeezed into a couple feet of boardwalk getting shots of this trio, they were sleeping most of the time we were there. It was great to capture the instant that the front stork was looking forward but it was an even neater experience to get his brother peeking at me from behind.

Face to Face with Bobby 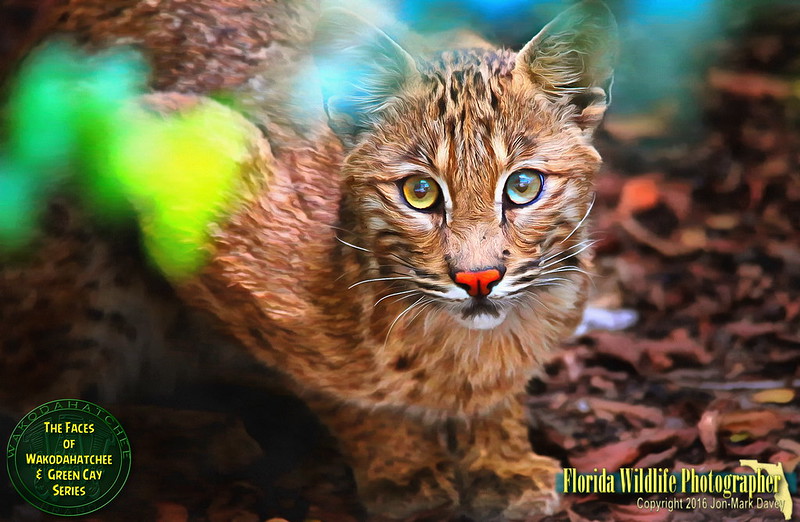 This image was photographed several years ago in Green Cay in the north-west tree tunnel. My wife, Jo, smelled the cat in the area, yes she can smell them, so I started quietly looking and spotted him trotting toward me east of the boardwalk. Since we were at the entrance to the tunnel I assumed that he would probably cross under the bridge about where I was standing and keep walking so I dropped to the floor and took a camera position peering out between the bars waiting for him to trot past. I assumed that he would just sprint right under the walkway and just keep going.

He rounded the tree just 6 feet away and stopped in his tracks and hunkered down to rest. Even though I had the camera rigged for silent shooting it still makes a muted “thunk” as the mirror shutters between shots so it caught his attention and he looked directly at me.

For just a moment I felt like I could see right into the spirit of that cat. At this point in the story I could go into a complete dissertation why we have to protect our wildlife and our planet for future generations but I think I’ll let you look into Bobby’s eyes yourself and see what he is quietly whispering to you. You know, our wildlife has a voice, yours. Use it to tell their story any way that you can.

Let’s all work to save our planet, save our natural heritage to pass on to future generations. Teach your kids and your grand kids too. If you don’t, who will?

I hope you have enjoyed my little photo project this Memorial weekend. Try it yourself sometime.